skip to main | skip to sidebar

HOW NON-BEING HAUNTS BEING: On Possibilities, Morality and Death Acceptance 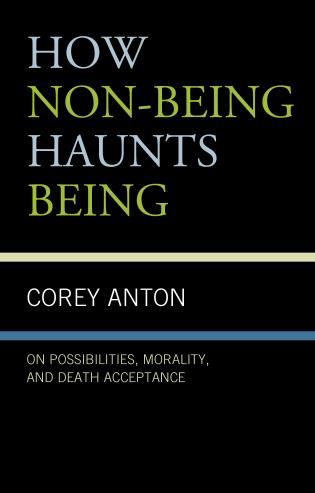 How Non-being Haunts Being reveals how the human world is not reducible to “what is.” Human life is an open expanse of “what was” and “what will be,” “what might be” and “what should be.” It is a world of desires, dreams, fictions, historical figures, planned events, spatial and temporal distances, in a word, absent presences and present absences.

Corey Anton draws upon and integrates thinkers such as Jean-Paul Sartre, Henri Bergson, Kenneth Burke, Terrence Deacon, Lynn Margulis, R. D. Laing, Gregory Bateson, Douglas Harding, and E. M. Cioran. He discloses the moral possibilities liberated through death acceptance by showing how living beings, who are of space not merely in it, are fundamentally on loan to themselves.

A heady multidisciplinary work, How Non-being Haunts Being explores how absence, incompleteness, and negation saturate life, language, thought, and culture. It details how meaning and moral agency depend upon forms of non-being, and it argues that death acceptance in no way inevitably slides into nihilism. Thoroughgoing death acceptance, in fact, opens opportunities for deeper levels of self-understanding and for greater compassion regarding our common fate. Sure to provoke thought and to stimulate much conversation, it offers countless insights into the human condition.

How Non-being Haunts Being makes much ado about nothing. A nimble scholar and graceful writer, Corey Anton explains why and how “human experience and reality as a whole can show itself for what it is only as we grasp how nothing or non-being relates to being.” Revelatory and provocative. Timely and important.— Sheldon Solomon, Skidmore College

Posted by Corey Anton at 7:41 AM No comments:

Taking Up McLuhan Cause 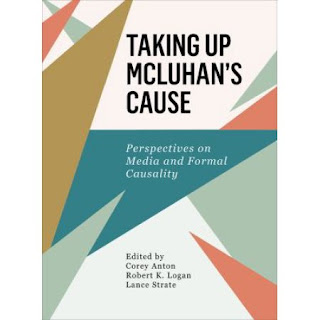 This book brings together a number of prominent scholars to explore a relatively under-studied area of Marshall McLuhan’s thought: his idea of formal cause and the role that formal cause plays in the emergence of new technologies and in structuring societal relations. Aiming to open a new way of understanding McLuhan’s thought in this area, and to provide methodological grounding for future media ecology research, the book runs the gamut, from contributions that directly support McLuhan’s arguments to those that see in them the germs of future developments in emergent dynamics and complexity theory.


“Very good essays on a crucial intellectual topic. . . . I’m hopeful that this anthology will help kick off another McLuhan movement . . rooted in McLuhan’s place in the great tradition of philosophies of causation.”   (Graham Harman, American University in Cairo)

Chapter One: The Form of Things to Come: A Review of Media and
Formal Cause
Corey Anton

Chapter Three: Medium as ‘Metaform’: An Inquiry into the Life of Forms
Paolo Granata

Chapter Five: The Effects That Give Cause, and the Pattern That Directs
Lance Strate

Chapter Thirteen: Disrobing the Probe, Unpacking the Sprachage: Formal Cause or
the Cause of Form Reframing McLuhan and the Kabbalah
Adeena Karasick
Posted by Corey Anton at 6:05 AM No comments: 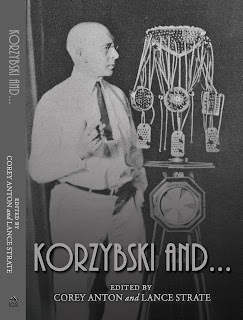 "In this volume, Corey Anton and Lance Strate have carefully crafted a collection of comparisons of Korzybski's thoughts to other key philosophers and their ideas. Media, semiotics, imagination, rational thought, cultural studies, and cyberculture are only a sample of the many stimulating topics that come to life in this book...With freshness and vision, this edited collection takes us on a thought-provoking journey connecting us to the essence of Korzybski's contribution. I found it to be a thoroughly enjoyable read." -Karen Lollar Ph.D. Chair, Communication Arts and Sciences Metropolitan State University of Denver Author of The Talk Within: Its Central Role in Communication (2012) "The collection of essays contained within this book represent a gallant and exquisite attempt to backtrack, as well as to sidetrack and track ahead, and show how Alfred Korzybski's enterprise is indeed aligned not only with various strains and traditions in academic thought and scholarship, but with the work of a host of significant theorists from across the disciplines. As such Corey Anton, Lance Strate, and their contributors have done a great service to Korzybski's legacy, and to the continuation and expansion of general semantics as both an applied and a theoretical system. They have positioned Korzybski and his work as a locus, rather than an outlier." -Thom Gencarelli, Manhattan College "Corey Anton and Lance Strate have assembled a 'wild variety' of 16 erudite essays demonstrating the past, present and continuing influence and relevance of Korzybskian general semantics. Academic specialists from diverse fields explore the "connections, intersections, and divergences" between general semantics and assorted topics ranging from phenomenology to psychotherapy to philosophy; from Heinlein to Hayakawa to Heidegger; from matters of time and temporality to the nature of human happiness. "Korzybski And ..." is a collection not to be missed, an example of time-binding at its finest." -Jacqueline Rudig, IGS Past Vice-President
Posted by Corey Anton at 5:04 AM No comments: 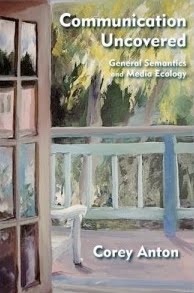 "Superb scholarship. The range and depth of the author's comprehension is stunning. Professor Anton has made a groundbreaking contribution to the field.
Scholars, take note!"
--Lee Thayer, Distinguished Professor (ret.) and author of Explaining Things

"Anton's thoughts on reading and education, especially poignant in this time of rapidly declining literacy, are nicely complemented by the suggestions and observations on ecology of media. His characteristic wit and wisdom enliven every essay herein."
--Eric McLuhan

"Corey Anton brings a brilliantly original voice to the discipline of general semantics, the field of media ecology, and the theories associated with cybernetics and the systems view. Scholarly, passionate, and inspired, this collection of essays should be required reading for anyone interested in human communication, signification, symbolization, and mediation."
--Lance Strate, Professor of Communication and Media Studies, Fordham University; author of On the Binding Biases of Time and Other Essays on General Semantics and Media Ecology; past president of the Media Ecology Association and former Executive Director of the Institute of General Semantics

"This book is for the growing number of professors who are concerned about reading and traditional literacy skills in education. Aspects of communication are revealed in Anton's provocative essays which guide us to a better humanistic understanding of communication." --Susan B. Barnes, Professor, College of Liberal Arts, RIT

Posted by Corey Anton at 6:01 AM No comments:

Get Your Copy Today! 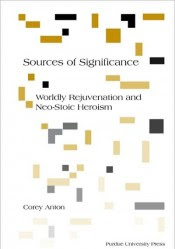 
Winner: 2011 Best Book Award from National Communication Association's Philosophy of Communication Division
"...extending some important strains of his previous award-winning work, Selfhood and Authenticity (2001)...Anton breaks new ground by bringing the works of Ernest Becker, Kenneth Burke and Hans Jonas into resolute dialog, allowing each to interpret and extend the other. What emerges is a truly original perspective, emphasizing the universality in human affairs of 'natural guilt' and the various avenues provided by culture for its expiation." --Daniel Liechty, Illinois State University, is Vice President of The Ernest Becker Foundation

"Deluding ourselves as self-made, denying death by ritual or cultural means (today by accumulating money and things), we fail to recognize the sources of our being and therefore to live graciously.. . Like Stoics whose physics and metaphysics were hardly incidental to their ethics, Anton ontologically grounds this diagnosis in logos and the cosmos before moving to his ethical prescriptions." --Richard H. Thames, Duquesne University, associate professor in Communication and Rhetorical Studies
"Corey Anton is an intellectual everyman, and everyman's intellectual. His tours through the familiar always yield the unexpected, and his journeys to the esoteric end up feeling like long voyages home." --Douglas Rushkoff, author, Life Inc., Media Virus!, and Program or Be Programmed
BUY NOW

Posted by Corey Anton at 5:39 AM No comments:

New Book: Media and the Apocalypse

Introduction
Annette M. Holba/Kylo-Patrick R. Hart
Part I: Reexamining End of the World
The Day After the End of the World: Media Coverage of a Nonevent
Terri Toles Patkin
Part II: Media and the Apocalypse
Apocalypticism in American Folk Music
Gary Baines
Empty All Along: Eraserhead, Apocalypse, and Dismantled Masculine Privilege
Jason T. Clemence
How to Save the Unsaved World?: Transforming the Self in The Matrix, The Terminator, and 12 Monkeys
Jörn Ahrens
Diversity, The Doom Generation, and the Apocalypse
Kylo-Patrick R. Hart
Occultic Rhetoric in the Buffyverse: Apocalypse Revisited
Annette M. Holba
The Pleasure of Sadism: A Reading of the Left Behind Series
Christian Lundberg
Apocalypse Documented: An Audiovisual Representation of September 11, 2001
Mark J. Porrovecchio
Exploring Science as Salvation in Apocalyptic Films
Brent Yergensen
Apocalypto Now: A New Millennial Pax Americana in Crisis?
Terence McSweeney
Part III: The Future of the End of the World
Futuralness as Freedom: Moving toward the Past that Will-Have-Been.
Corey Anton
See Video
Posted by Corey Anton at 7:39 AM 1 comment: 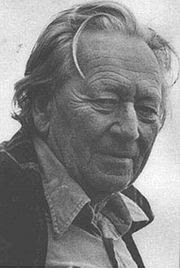 Not all Differences Make that Much of a Difference

Where, Bateson asks us, is the difference between any two items?

Of any object, any object at all, you could spend the rest of your life giving truthful assertions regarding what it is not. And, it is often fairly easy to identify some of the similarities between two items. But only more discerning inquirers are able identify those differences that make a difference.

Posted by Corey Anton at 5:00 AM No comments:

Having No Alibi: The most important words that you need to hear, only you can say. Too many things are left unsaid by those who forget that they themselves need to say them.

Speaking of Possibilities: What could be more precarious than an animal that has learned to talk. Such strange and fanciful beings come mostly to concern themselves with what is not the case.

Trust Your Becoming: The question is not can we relearn what we know we forgot but can we discover what we never knew we know?

BUY THE BOOK NOW
Posted by Corey Anton at 9:35 AM No comments:

Giving Thanks to the Cosmic Mystery (Youtube & Wide-Eyed Article)

Death and the Meaning of Forgiveness

And just what if the Divine Mystery that resides in the depths of our being needs deep and profound forgiveness for all the eternally unresolved injustice and terror of existence? The trouble with being born is that no one asks for it. But somehow, evolution made possible beings who came to know of their own death, and we, those very beings, may need to learn how to forgive the mysterious origins for such possibilities.

This is not a machine.